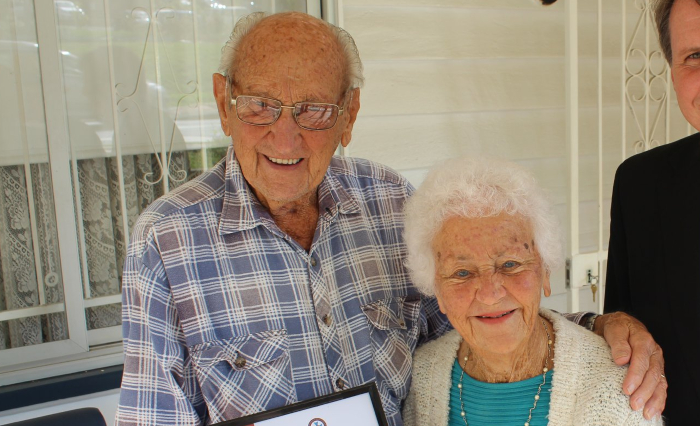 The Kenmore community is mourning and paying respects to Ted Carlow, a beloved resident and neighbour known for his friendly demeanor, who passed in early April 2021.

FFor decades, Edward “Ted” Carlow, together with his wife Nola Carlow, waved at passersby from their porch in Kenmore. Married for 71 years, the couple lived together well into their golden years. Last month, friends and family bid goodbye to Ted, who passed at 95.

In 2019, both Ted Carlow and Nola Carlow received a special award from Dr Christian Rowan, Liberal National Party State Member for Moggill, that commemorated their contributions to the local area by being such positive and friendly members of the community.

The Carlows had managed to inspire those around them by simply smiling and waving from their porch.

Ted’s passing came as a shock to the community, and people had remarked on social media that they were grieving his loss.

One person in particular remarked, “RIP Ted, you endeared yourself not just to Kenmore residents but to all those who travelled Moggill Rd! My daughters have very fond memories of seeing you and Nola on your verandah!”

Another had mentioned that the Carlows had become a part of their daily rituals, keeping an eye out for them on their way home for years. “Every afternoon on my bus ride home from school I would look left. I feel like I’ve watched you both grow while I’ve grown myself. I’m 42 now and I’ve continued to look out for you both daily on my trips back home to Brookfield.”

Ted’s funeral was held on the 21st of April 2021 at Centenary Memorial Gardens, where his family and friends celebrated his decorated life. He was not only a beloved father, father-in-law, grandfather and great-grandfather to his family, but he was also a valued member of the Kenmore community.