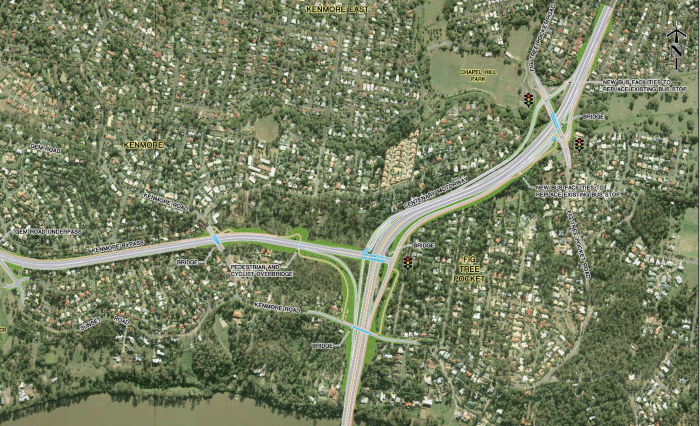 The notoriously problematic intersection of Kenmore Rd and Fig Tree Pocket Rd is due to receive some new upgrades that can minimise danger and increase capacity.

In May 2021, Brisbane City Council announced the successful allocation of funds to upgrade the notorious Kenmore Rd Intersection, an area that has seen two significant crashes between 2013 and 2018. Both of these crashes involved motorists turning right out of Fig Tree Pocket Rd and failing to give way to westbound traffic on Kenmore Rd.

As a result of these crashes and local clamor for improvement, Council has opted to draft designs to improve the safety of the intersection. These drafts entail the realignment of the south of Fig Tree Pocket Rd to create a new four-way intersection with Errogie Place, as well as the construction of new traffic lights. Pedestrian crossings will also be installed at the traffic lights, and the footpaths in the area are due to receive some improvements.

Further updates revealed that the new design and layout of the upgraded intersection and the new traffic lights have been designed to forecast future traffic volumes to guarantee that these upgrades help the intersection operate safely, efficiently, and within capacity. These will be accomplished with the addition of new turning lanes on Kenmore Rd and both legs of Fig Tree Pocket Rd.

Six months after these upgrades have been implemented, a post-construction survey will be released to check if the intersection is operating as predicted.

A new 4-lane bypass has also been proposed that will reconfigure the Centenary Motorway and the Fig Tree Pocket interchange, linking the former directly to Moggill Rd. The project also entails the reconfiguration of Gem Rd to pass under the bypass, linking it directly to Sunset Rd. A shared off-road pedestrian and cyclist path will also be provided along the entire bypass route, connected to the Centenary Bikeway.

This proposal aims to increase safety, capacity, network efficiency, and traffic flow while simultaneously reducing congestion during peak hours and travel time. Though the proposal to build the new Kenmore bypass currently lacks funding. Those interested in learning more about the proposal can read about it here.