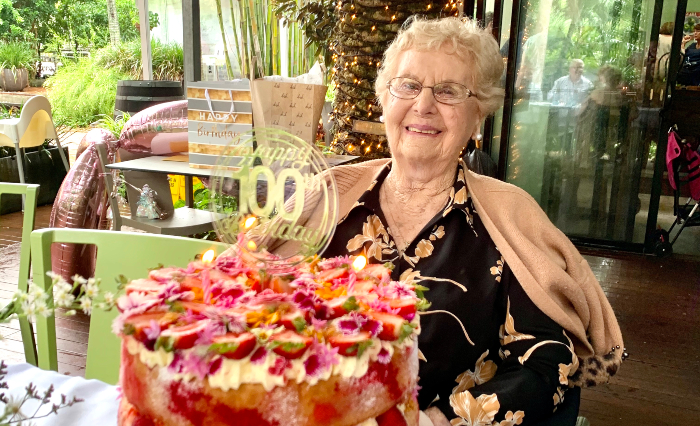 Joan Davey joined the Carinity 100 Club on Wednesday, the 24th of March 2021, making her the second member this year to do so. Fellow resident Winifred Tazey also celebrated her centennial birthday earlier in January 2021.

In her youth, Joan’s fascination with music pushed her towards a career as a pianist before getting married to Robert, her childhood sweetheart. The couple eventually had children and set their sights on establishing a home for themselves in Adelaide, where they formed a successful electrical business and partook in horse racing.

Joan and Robert eventually divorced, and in the early 1960s, she remarried. Norman, her new husband, brought her abroad as he worked in numerous countries in Asia such as Singapore and the Philippines. Joan established a charity for underprivileged children in Manila, aiming to provide kids with a steady means of vital nutrition.

During the ‘70s, Jean and Norman returned to Australia, settling in Sydney, where they stayed until Norman’s untimely and sudden death. During her time in New South Wales, she worked as a volunteer for the Royal South Sydney Hospital before becoming their chief fundraising officer.

Following Norman’s passing, she decided to return to Queensland to be closer to her daughter and grandchildren. At the age of 80, she met Daniel, with whom she spent 14 years with until his eventual passing. The two spent his last four years in the Carinity Brookfield Green aged care community.

Joan, a hundred years old, is a beloved mother, grandmother, and great grandmother with over 18 descendants to succeed her. Even after Daniel’s passing, she has opted to remain in Carinity Brookfield Green and still lives under their care to this day.