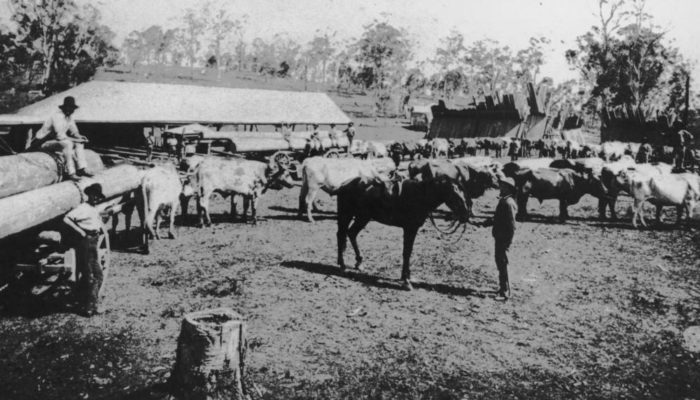 The museum building is a former Pullenvale Farmhouse which has a room that was operated as Pullenvale Post Office between 1879 and 1958. In 2003, the building was moved from White Cedar Road, Pullenvale to the Brookfield Showground and underwent several alterations.

On 3 December 2004, the building was officially opened as The Brookfield District Museum. The museum is divided into three rooms, exhibiting collections from Brookfield pioneering families, the Brookfield Show, and household items from the last century.

Once a well-forested area, timber became a prominent industry in Brookfield. During the 1800s, timber was hauled by the Bullock team to the rafting ground and rafted down the Brisbane river. Timber also end up at ‘Bon Accord’ — Brookfield’s own sawmill, established by Charles Patterson in 1875 — on Brookfield Road. The Rafting Ground Reserve and Rafting Ground Road now serve as reminders to this early Brookfield industry.

Many of the tools and photographs representing this era, along with early farming equipment from early twentieth-century Brookfield settlers are on display at the museum, such as a waistcoat worn by one of the area’s major landholder to his wedding in 1854.

Also included in the museum’s collection are many of historical research and publication produced in the past fourteen years and some of Brookfield Show Society and Brookfield Pony Club archives.

The Brookfield District Museum is open 9 a.m. on Brookfield Market Saturdays, the first and third Saturdays in each month, and during Brookfield Show. Off-street parking and disabled access are available at the site.