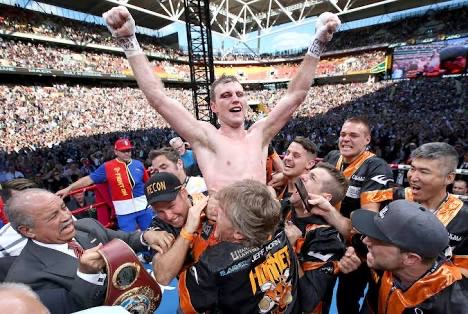 Greg Adermann was elected Councillor for Pullenvale Ward in March 2020. In this column, Cr Adermann reminisces about how his years in journalism, sports and event management, and marketing management, have all led to his present life of service to his constituents.

Presenting a major event is a lot like a duck swimming. Everything on the surface appears calm but underwater, the duck is paddling furiously. There is so much going on behind the scenes and if all goes to plan, nobody notices. People enjoy the event and go home happy.

It’s a real buzz seeing a major event like State of Origin or a concert come together and the look of satisfaction on people’s faces as they leave the venue.

Contrary to what many people believe, you don’t sit around watching events when you work at a major venue. Everyone has an event day role and if they all do their job, everything goes like clockwork.

There were a number of standout moments in the 17 years that I spent with ASM Global. State of Origin for me is the biggest event on our sporting calendar, so they always rate highly. The best is when Queensland wins and the Origin moment was the Billy Slater individual try in 2004.

Concerts are huge and of the 25 or so we presented, Paul McCartney was my favourite. As a massive Beatles fan, nothing was ever going to top that. Coming within two metres of him as he left the venue was an unexpected bonus.

The Welsh fans staying back after losing the 2003 Rugby World Cup quarter-final to England and singing “Delilah” was another special moment.

Getting to know Jeff Horn, who beat Manny Pacquiao on one fateful July afternoon in 2017 to claim a world boxing title, and working with such a professional team from Liverpool when they played an exhibition game at the Stadium, were also very memorable events.

Indeed, I am grateful for a life filled with very special moments.

I come into the role of an elected public official at the most challenging time imaginable. Who would have thought at the start of my journey in late January that the world would look the way it does today?

I come from a simple background. Born and educated in Kingaroy, I lived on a farm for a number of years. I began my career working in country and regional newspapers and in television, before moving to Brisbane to pursue my dream of becoming a State Government Ministerial Press Secretary.

After eight years in that role, I evolved into a communications and marketing executive in the corporate world, a role that I did up until seeking pre-selection.

I’ve been fortunate during the past 28 years to have worked for a number of blue-chip companies, including Telstra, Foxtel, the International Management Group and most recently, ASM Global, previously known as AEG Ogden, the company to whom I owe my Suncorp Stadium moments.

In 1991, my wife Cia and I built our home in Chapel Hill and raised our family. We still live there today. We part-owned and managed a small business in Kenmore for about five years and have been active in local School and community groups, building many friendships that will last a lifetime.

I am proud to be a member of the Kenmore Rotary Club and intend remaining so, helping out with the outstanding work they do whenever I can.

I’m also proud to be a Life Member of the Kenmore Bears Junior AFL Club, despite never having kicked an AFL ball in my life. Together with a number of other local parents, we helped save what was an embattled Club and today, I look with pride at how the current group of volunteer parents have taken it to another level.

I made a promise then, as their local representative, and will honour my undertaking to be available, transparent, consultative, and accountable. I won’t advocate a position to Council until I’m certain about what my constituents think first.

It was pretty obvious early into my campaign what the main issues were. In no particular order, these are:

Given that three of these issues have a common theme, I am excited to have been appointed to Council’s Public and Active Transport Committee. I look forward to working with my colleague, Cr Murphy, as its Chair to determine the strategy for how we can take these services to another level, not only in my Ward but for our great city.

I would like to thank the majority of residents in the Pullenvale Ward who put their trust in me to represent them in City Hall for the next four years, as a proud member of “Team Schrinner.”

What the Lord Mayor achieved on the 28th of March was a monumental feat, coming out on top with his personal vote and retaining all 19 Wards for the Liberal National Party. Clearly, his message that “experience matters in such times” resonated with the electorate.

As the Lord Mayor reminded us after the election, we all need to get back to work as quickly as possible and do whatever we can in our communities to assist in Brisbane’s recovery efforts.

It is an unbelievable honour to serve. My pledge to everyone, irrespective of who they voted for, is to work hard and tirelessly in their interests, and not let them down.

That is precisely what I have been doing, working hard to identify those at most risk who need help.

My life and professional experience, coupled with the support of my fellow Federal and State representatives, local community groups and leaders, have prepared me well for the challenges that await.

Who knows, I may even have time to go back to the Stadium, this time as a fan. I suspect though, that I’ll always be looking around picking up little things that mostly go unnoticed. Old habits die hard, particularly when they have served one in good stead.