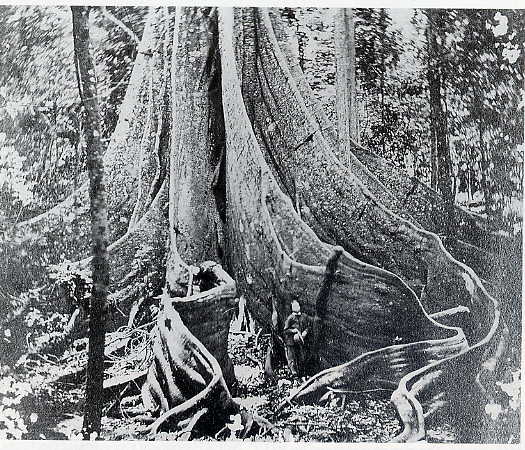 A tranquil suburb located between the Centenary Motorway and Brisbane River, Fig Tree Pocket represents a leafy, quiet beauty with its tree-lined streets. Who would have thought that a place like this is just 12km away from the CBD?

The suburb’s name is taken from the Moreton Bay fig tree and just recently, a Facebook user, Stephen Sheffield shared an old photo of the huge fig tree that influenced the name of the suburb, which he shared on Old Brisbane Album’s Facebook page.

Along with the photo comes a letter from A.V. Herbert at the Department of Lands and Works to the Surveyor General and it states:

“Sir, I have been desired to request you to be good enough to reserve the land situated about halfway between Oxley Creek and the Seventeen Mile Rocks on the left bank of the Brisbane River and upon which a remarkable fig tree stands of which a photograph is closed – it is assumed that there will be no difficulty in recognising the spot…”

The letter was dated 14th June 1866 and can be found at the Queensland State Archives.

According to history, the huge tree can shelter 400 people.

Sadly, this is the only memory of the enormous fig tree as today, the tree is no longer there. There are many reasons that could have caused its disappearance such as fires, land clearing, and floods.