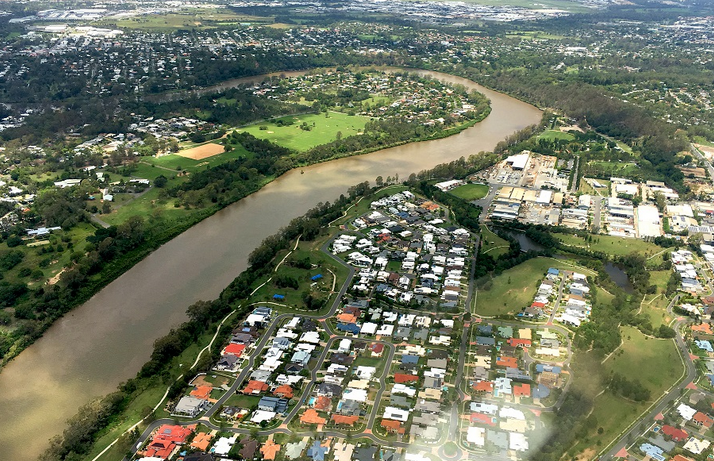 Ken Ryan has lived in the Kenmore area for 34 years and as one of Brisbane’s longest-serving Town Planners (initially working in Council then in private practice advising clients seeking planning approvals), he has witnessed many changes to Kenmore, Brookfield, Pullenvale, Anstead, Bellbowrie, Moggill, and Pinjarra Hills. As past president of Kenmore Rotary, he has also seen developments in the local community. In this monthly column, Ken will talk about his observations of the place he has called home since 1986.

Kenmore now thrives on convenient amenities and retailers that have evolved over many years to service the local community.

The shopping centre at 2060 Moggill Road that now houses The Courtyard Medical Centre, Medicines 4 Less, the Chinese restaurant, the burrito bar, 7 Eleven, Billtong and Jerky shop, 4069 real estate and Red Rooster was born in the 1990s.  It initially included one of the early self-storage businesses as well as some of the tenants that remain today.

Ron Gove, a local engineer (and a 10-pound pom!)  and several of his mates who were expats from Papua New Guinea, were clients of mine that identified an opportunity at the corner of Almay and Moggill Roads at Kenmore.

Our aim was to demolish houses that were a sub-optimal use for their position, and to develop a strip shopping centre with retail and office spaces, and a professional mix of tenants.

Because we limited the shopping centre to under 500 square metres, we did not require the rezoning that major developers had laboured to achieve over decades. Our approach ensured the development was limited to an advertised consent application, now known as a Material Change of Use, and was achieved quickly.

Strategic Location and Mix of Businesses

Our team of experienced investors bought up four dilapidated houses that were past their prime. After approaching well-known developer Griffin and Knowlman, we secured a small vacant lot for motor vehicle access to Almay street. This resulted in an efficient and safe vehicle access to Moggill Road, exit access via Almay street and through the intersection west to Bellbowrie, South to Kenmore Road and north-bound back to Chapel Hill and Indooroopilly.

A combined site of some 4,498 square metres provided scope for a variety of different residential and non-residential development options. The team contemplated town houses, but saw a greater opportunity for convenience shopping, offices and other uses such as travel agencies, that could not be accommodated at Indooroopilly Shopping Centre or at Kenmore Village Centre.

Although this was before the rise of Brisbane’s coffee culture, it was not long before our team also leveraged the changing mix of urban use and community demand to jump on that bandwagon. We sought and gained approval for the Coffee Club development with real estate office, medical facilities opposite at the corner of Merlin Terrace.

We had some hurdles with the adjoining Red Rooster developers but more importantly, we ultimately worked with the local primary school to be able to obtain physical connections to BCC services. In exchange, we provided a guaranteed drop-off zone for parents who could use surplus car parking during their peak drop off times, such as Kenmore Primary School, which had virtually no on-site staff parking or safe drop-off areas.

Also, an at-grade walkway was offered and accepted as a unique solution to their long-term issues. Historically, many state schools have been unable to provide adequate drop off infrastructure for parents of students.

When Alignment of Interests Results in Positive Outcomes

Having the nous to nurture this collaborative approach was critical to ensuring a positive outcome through an alignment of interests. This principle also holds true when interfacing with sensitive residential uses.

For example, several owners in Cranwood St were concerned about reverse amenity issues, such as potential noise, headlight glare, and visual amenity issues, being situated at the rear of a shopping centre.

Through consultation, our team identified landscaping solutions for the rear walls and suggested the use of acoustic devices and blank walls to minimise noise impacts for the new shopping centre, and a restaurant at the front of the well-designed and articulated building form.

Consequently, an owner commended Ron and his team for exceeding promises and obligation during the official completion of the project and opening of the development. This affirmation was reassuring, Our approach of commitment was supported by the team, many of whom lived in the locality with their families and valued the positive regard that the success brought to their reputation in the community.

Again, an alignment of interests can provide a positive outcome for all, and requires a deft touch where developer and resident interactions can typically be adversarial.

Then-Councillor Margaret de Witt was consulted before lodgement. Concerns were also addressed in our professional reporting, with input coming from various disciplines, such as Town Planning, Architecture, Civil Engineering Services, Traffic Engineering, and Acoustic Engineering, among others.

Liaison with Main Roads Department (now DTMR) resolved their issues. After some protracted negotiations, our clients paid for the upgrade of the sequencing of the intersection, even though the development would not trigger intersection upgrades for many years. Despite not being required by legislation, the future public costs of the upgrade were levied by the Main Roads Department on our client.

Cooperation between the adjoining owners resulted in complicated easement arrangements between the owners and their customers, providing optimum sightlines for both cars and pedestrians. This was particularly significant, knowing that in the future, the area opposite Merlin Terrace would be closed to right-turn movements.

The undercroft at the rear of the building provided space for much-needed self-storage units. At that time, these were only available across the Brisbane River at Sumner Park and no other storage or industrial facilities existed to service the community.

Unfortunately, subsequent changes with the gazettal of the City Plan 2000 saw changes to limit convenience shopping centres of this size. Further changes in 2014 saw the need to identify any lack of vacancies in existing centres and demonstrate virtually overwhelming needs before any new project is approved. Usually, these projects would be limited to under 250 square metres for a new location.

Existing approved centres and strips enjoy protection from these new projects. In my experience, this stifles innovation and job creation. It also limits a flexible response to evolving local needs and to changes in community composition.

Read: Kenmore’s Future Was Decided in a Heated Debate in the 1980s

Rather than being a dis-incentive to pursue development opportunities, it reinforces the importance of engaging experienced town planners, whose success and longevity has relied on their ability to adapt and respond to changing planning frameworks, economic conditions,  political environments, and even the rise of NIMBism.

While some negative sentiment will suggest contraction of the shopping centre and mixed-use market due to online shopping and the affects of COVID-19, I submit that this industry has seen the rebound of many a downturn amidst many innovations such as the proliferation of coffee shops, health food shops, malls, flea markets, cinemas, farm produce markets, internet cafes, car boot sales, and outdoor and footpath dining.

The experiences of meeting in new locations with innovative attractions will inevitably rely on the experiences of past projects, knowing the way through legislation, and addressing community issues.

Ken Ryan has worked both sides of the Planning fence, having started his working life in the planning department of Brisbane City Council. Ken Ryan & Associates has been established for more than 18 years and has a team of dedicated and experienced Town Planners with specific core skills in Development Assessment, town planning site investigations, and planning scheme preparation and implementation.